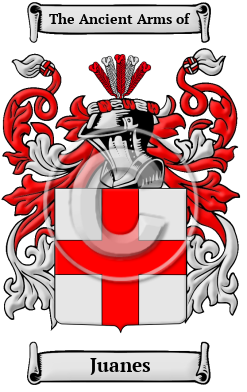 Early Origins of the Juanes family

The surname Juanes was first found in Castile, preeminent among the Christian kingdoms of medieval Spain.

Early History of the Juanes family

Prominent among members of the family were Pedro Yáñez Espiga and Fernán Ibáñez Baticela, who received a grant of land in the Repartimiento de Córdoba after that city was retaken from the Muslims in 1236; Gonzalo Yáñez de Meneses, who fought in the reconquest of Seville in 1248; Gonzalo Yáñez, who received a gift of land from King Alfonso X in 1257; Rodrigo Yáñez, author of the fourteenth century Leonese "Poem of Alfonso XI"; fifteenth century nobleman Alonso Yáñez Fajardo; Domingo Báñez, sixteenth...
Another 82 words (6 lines of text) are included under the topic Early Juanes Notables in all our PDF Extended History products and printed products wherever possible.

Juanes migration to the United States +

Juanes Settlers in United States in the 19th Century