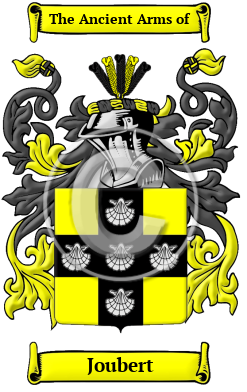 Noble surnames, such as Joubert, evoke images of the ancient homeland of the French people. The original bearer of the name Joubert, which is a local surname, once lived, held land, or was born in the beautiful region of Berry. In France, hereditary surnames were adopted according to fairly general rules and during the late Middle Ages, names that were derived from localities became increasingly widespread. Local names originally denoted the proprietorship of the village or estate.

Early Origins of the Joubert family

The surname Joubert was first found in Berry, a former province until 1790 when it became a region in central France.

In the region of Saintonge the Jouberts were lords of Christophe; in Brittany the Armorial of 1696 cites an alderman of Rennes, a parliamentary lawyer, a rector of the Trinité de Clisson. Laurent Joubert, born in Valence in 1529, became a doctor and in 1573 became Chancellor of the University. He left behind many important works. [1]

Early History of the Joubert family

Spelling variations of this family name include: Joubert, Jouberteix, Jouberton, Joubertin, Joubin and many more.

Notable amongst the family at this time was Nicolas Joubert, also known as Angoulevent or Engoulevent (nighthawk), born during the seventeenth century in Burgundy, was a French jester. François Joubert, born in Montpellier in 1689, was a religious author. Joseph Joubert was a lexicographer and Jesuit in Lyon. He was known during the seventeenth century for the French-Latin dictionary he published. Joseph Joubert was a moralist in Montignac around 1754; Pierre-Jean Joubert de la Salon...
Another 75 words (5 lines of text) are included under the topic Early Joubert Notables in all our PDF Extended History products and printed products wherever possible.

Joubert Settlers in Canada in the 17th Century

Joubert Settlers in Canada in the 18th Century