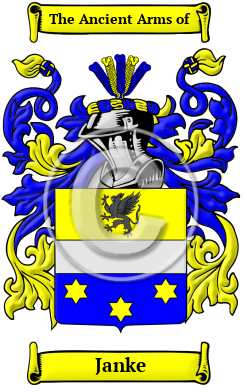 The German surname Janke is derived from the popular first name "Johann," and simply means "son of Johann."

Early Origins of the Janke family

The surname Janke was first found in Plauen, in the eastern part of Saxony, where Johannes Jahn, the first recorded bearer of the name, was living in 1475.

Early History of the Janke family

Prominent bearers of the family name Janke at this time were Sigismund Janke (1609-1663), a theologian and poet, Johann Gottfried Janke (1724-1763), an artist, Frederick Ludwig Jahn (1778-1852), a physical educationist known...
Another 32 words (2 lines of text) are included under the topic Early Janke Notables in all our PDF Extended History products and printed products wherever possible.

In the United States, the name Janke is the 11,053rd most popular surname with an estimated 2,487 people with that name. [1]

Janke migration to the United States +

Janke Settlers in United States in the 19th Century

Janke Settlers in United States in the 20th Century