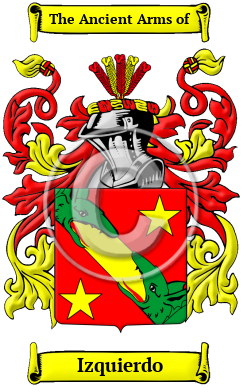 The noble surname Izquierdo is of Spanish descent, and is derived from the word "izquierdo" meaning "left." The surname Izquierdo is of nickname origin, being derived from a physical characteristic of the initial bearer. The word "izquierdo" is ultimately of Basque/Celtic origin deriving from a combination of the Basque word "escu" meaning "hand" and the Celtic "kerros" meaning "left." In this instance, the nickname may have been applied, as an easy means of identification, to one who was left handed.

Early Origins of the Izquierdo family

The surname Izquierdo was first found in the northeastern region of Aragon, before extending into most other regions of ancient Spain. However, evidence shows that the Izquierdo surname was also present in the Southern province of Murcia in the early Middle Ages.

Early History of the Izquierdo family

This web page shows only a small excerpt of our Izquierdo research. Another 105 words (8 lines of text) are included under the topic Early Izquierdo History in all our PDF Extended History products and printed products wherever possible.

Spelling variations of this family name include: Esquerra, Ezquerra, Izquierda, Esquerdo and others.

Another 31 words (2 lines of text) are included under the topic Early Izquierdo Notables in all our PDF Extended History products and printed products wherever possible.

In the United States, the name Izquierdo is the 10,610th most popular surname with an estimated 2,487 people with that name. [1]

Izquierdo migration to the United States +

Izquierdo Settlers in United States in the 19th Century