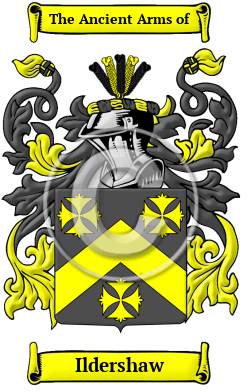 Early Origins of the Ildershaw family

The surname Ildershaw was first found in Cambridgeshire at Hildersham, a small village 8 miles south-east of Cambridge. Historically a parish, in the union of Linton, hundred of Chilford, this place formerly belonged to the De Veres, earls of Oxford, who were lords of the manor. A Roman road leading from the station near Cambridge to Colchester bounds the parish and can still be clearly seen today. [1]

Early History of the Ildershaw family

Distinguished members of the family include Arthur Hildersham or Hildersam (1563-1632), English Puritan divine, son of Thomas Hildersam, by his second wife, Anne Pole, born at Stetchworth, Cambridgeshire, on 6 October 1563. "He was of royal descent through his mother, a daughter of Sir Geoffrey Pole, brother to Cardinal Pole. His parents, who were zealous Roman Catholics, designed him for the priesthood; but in preparation for the university he was sent to the grammar school of Saffron Walden, Essex, where Desborough, the master, grounded him in Protestant principles. In 1576 he was entered at Christ's College, Cambridge. Two years later his...
Another 159 words (11 lines of text) are included under the topic Early Ildershaw Notables in all our PDF Extended History products and printed products wherever possible.

Migration of the Ildershaw family

To escape the unstable social climate in England of this time, many families boarded ships for the New World with the hope of finding land, opportunity, and greater religious and political freedom. Although the voyages were expensive, crowded, and difficult, those families that arrived often found greater opportunities and freedoms than they could have experienced at home. Many of those families went on to make significant contributions to the rapidly developing colonies in which they settled. Early North American records indicate many people bearing the name Ildershaw were among those contributors: the name represented in many forms and recorded from the mid 17th century in the great migration from Europe. Migrants settled in the eastern seaboard from Newfoundland, to Maine, to Virginia, the Carolinas, and to the islands..