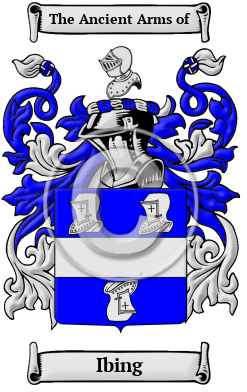 Early Origins of the Ibing family

The surname Ibing was first found in Lower Saxony, where the name is connected to Bremen and Hamburg. The name also appears often in Röstock, in Mecklenburg. However, the surname Ibing can be traced back to 13th century Carinthia, where one named Ivo was the archbishop in 1254. Jacob Ybing resided in Hamburg in 1266, and Godeke Yben filius Ybonis in Stralsund in 1300. Ybo de Frisia was recorded in 1301. Konrad von der Ybe was a resident of Freiberg in Saxony in the year 1412, and Franz Yban was the archpriest of that city in 1425.

Early History of the Ibing family

This web page shows only a small excerpt of our Ibing research. Another 56 words (4 lines of text) are included under the topic Early Ibing History in all our PDF Extended History products and printed products wherever possible.

More information is included under the topic Early Ibing Notables in all our PDF Extended History products and printed products wherever possible.

Migration of the Ibing family

Some of the first settlers of this family name or some of its variants were: Christoph Ibe, who served as a mercenary soldier with the British during the American Revolution, and settled in North America in 1778; and Richard Friedrich Eduard Ipsen, who settled in Iowa in 1867. Hausrentz Iber arrived in Baltimore in 1869.