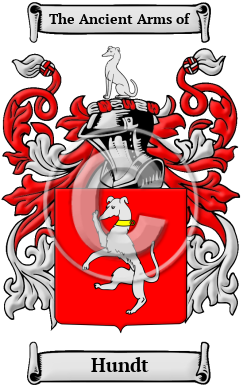 The ancient and distinguished German surname Hundt is of patronymic origin, deriving from the first name of the father of the original bearer. Hundt comes from "Huno," which is a personal name of unclear origin; it may be derived from "Hun," the name of the Asiatic race of nomads who ravaged Europe during the 5th century, or from "Hunn," the Old Norse diminutive meaning "little bear."

Early Origins of the Hundt family

The surname Hundt was first found in Swabia, where the name is thought to have emerged. The name dates back as far as 1270, when Rudi Huno was working as a tax collector in Basel. The young Hundt family was instrumental during this formative period, figuring prominently in the early history of the region and contributing greatly to the development of medieval Swabian society.

Early History of the Hundt family

Spelling variations of this family name include: Hunn, Hun, Hunne, Hunel, Hundt and others.

Another 31 words (2 lines of text) are included under the topic Early Hundt Notables in all our PDF Extended History products and printed products wherever possible.

Hundt migration to the United States +

Hundt Settlers in United States in the 18th Century

Hundt Settlers in United States in the 19th Century