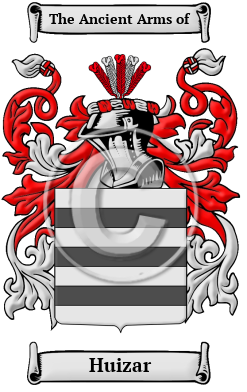 The surname Huizar is of Spanish descent and has an ancient and noble lineage. The family name is of toponymic origin, deriving from the place name where the initial bearer lived or held land. Hence, the surname Huizar or Huizi signifies "one who hailed from Huici." The place name Huici is derived from the Basque words "(h)ui" meaning "torrent" and "zi(hi)r," which signifies "old."

Early Origins of the Huizar family

The surname Huizar was first found in the district of Laurraun, in the northern Basque country.

Early History of the Huizar family

This web page shows only a small excerpt of our Huizar research. Another 86 words (6 lines of text) covering the years 172 and 1722 are included under the topic Early Huizar History in all our PDF Extended History products and printed products wherever possible.

More information is included under the topic Early Huizar Notables in all our PDF Extended History products and printed products wherever possible.

In the United States, the name Huizar is the 11,688th most popular surname with an estimated 2,487 people with that name. [1]

Migration of the Huizar family

Some of the first settlers of this family name or some of its variants were: a branch of the Huizar family who settled in Chile, in South America.