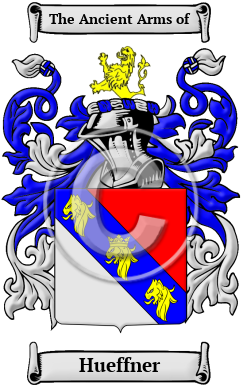 The Hueffner surname comes from the Middle High German words "hafner," or "hafen," meaning "pot," or "dish." As such, Hueffner was originally an occupational name for a potter.

Early Origins of the Hueffner family

The surname Hueffner was first found in Austria and southern Bavaria, where the family made a considerable contribution to the feudal society which became the backbone of early modern Europe. The family became prominent in local affairs and branched into many houses. These played important roles in local political conflicts, in which each group sought power and status in an ever changing territorial profile. Chronicles first mention Hugo Hafinare of Constance in the year 1158, Uli Hafner (Haefeli) of the Aargau region in 1490, and Hueglin Haffner of Kirchheim in 1406. Chronicles also mention an ancient branch of the family whose members were knights of the Kingdom of Styria from 1310 to 1478.

Early History of the Hueffner family

During this period prominent bearers of the name Hueffner were Enrico Haffner (1640-1702), an Italian painter of quadratura during the Baroque period, his father was from Switzerland. Phillip Hafner (1735-1764), was an Austrian lawyer who later became a dramatist. His numerous plays introduced good-humored farce to Viennese comedy and their influence was felt well into the next century. Otto Titan von Hefner, the son of Georg von Hefner, became famous as an authority on heraldry and related studies. In...
Another 79 words (6 lines of text) are included under the topic Early Hueffner Notables in all our PDF Extended History products and printed products wherever possible.

Migration of the Hueffner family