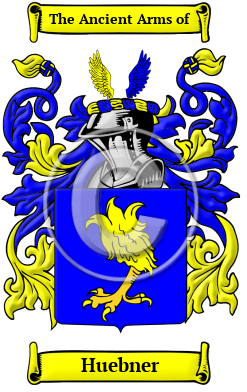 The roots of the distinguished German surname Huebner lie in the kingdom of Bavaria. The name is derived from the Middle High German word "huober," meaning "owner of a patch of farmland." The term "Hube" was used to denote a 40-acre hide of farmland. It is likely that the original bearer of this name was someone who owned such a farm.

Early Origins of the Huebner family

The surname Huebner was first found in Bavaria, where this family name became a prominent contributor to the development of the province. Always prominent in social affairs, the name Huber became an integral part of the region's affairs as it emerged to form alliances with other families within the Feudal System. The earliest known bearer of the name was Ulrich Miles dictus Huobaere, a resident of the town of Utlenheim in the Tyrol region of Austria in 1224.

Early History of the Huebner family

Another 41 words (3 lines of text) are included under the topic Early Huebner Notables in all our PDF Extended History products and printed products wherever possible.

In the United States, the name Huebner is the 7,090th most popular surname with an estimated 4,974 people with that name. [1]

Huebner Settlers in Canada in the 19th Century