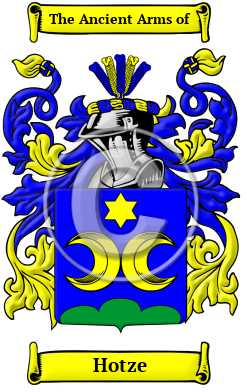 The distinguished surname Hotze is of German origin. It is derived from the German personal name "Hotze," which is itself derived from the Middle High German verb "hotzen," meaning "to run fast." It is likely that the surname was originally borne by the son of someone named Hotze.

Early Origins of the Hotze family

The surname Hotze was first found in the Tauber area, where it originally emerged as a personal name during the early 11th century. The earliest known instance of Hotze as a surname occurred in 1221, when Conrad Huzzo was recorded to be living in Würzburg. The young Hotze family was instrumental in the formation of Bavarian society in the early Middle Ages.

Early History of the Hotze family

Another 34 words (2 lines of text) are included under the topic Early Hotze Notables in all our PDF Extended History products and printed products wherever possible.

Migration of the Hotze family

Some of the first settlers of this family name or some of its variants were: Elsbeth Hotz, who emigrated from the Palatinate to North Carolina in 1743; Andreas Hotz, who settled in Philadelphia in 1750; Barbara Hotz, who immigrated to Texas in 1858.