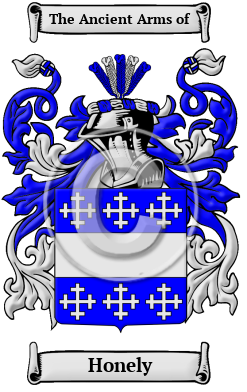 Early Origins of the Honely family

The surname Honely was first found in Buckinghamshire at Olney, a market town and civil parish in the Borough of Milton Keynes. The place dates back to 979 where it was listed as Ollanege. By the time of the Domesday Book, the place name had evolved to Olnei [1] which meant "island, or dry ground in a marsh, of a man called Olla," derived from the Old English personal name + eg. [2]

On November 4th, 1643, Olney was the site of the Battle of Olney Bridge, a skirmish in the First English Civil War. The town has a long history as a lace-making centre, but is best known as the place where the Olney Hymns were written.

John Newton (1725-1807), author of the hymn Amazing Grace was curate of Olney. Some of the family were found in Weston-Underwood in early times. "The church [of Weston-Underwood] is a neat structure, built by Sir John Olney in the 14th century." [3]

Early History of the Honely family

Spelling variations of this family name include: Olney, Onley, Oneley, Ongley and others.

Notables of this surname at this time include: Thomas Olney (ca. 1600-1682), English settler to America in 1635 aboard the ship planter, an early minister at the First Baptist Church in America and co-founder of Rhode Island and Providence Plantations. Sir Samuel Ongley (1647-1726), of Old Warden, Bedfordshire and Mincing Lane, London, was an English politician. Born in Maidstone, Kent, he became a London merchant. In 1698 he purchased the Old Warden Estate from Paulet St John, Earl of Bolingbroke. He was High Sheriff of Bedfordshire (1703-1704.) Samuel Ongley (1697-1747), of Old Warden, Bedfordshire, was...
Another 94 words (7 lines of text) are included under the topic Early Honely Notables in all our PDF Extended History products and printed products wherever possible.

Migration of the Honely family

Some of the first settlers of this family name or some of its variants were: Thomas and Marie Olney, who settled in Salem Massachusetts in 1635; Thomas and Epenetus Olney settled in Rhode Island in 1720.