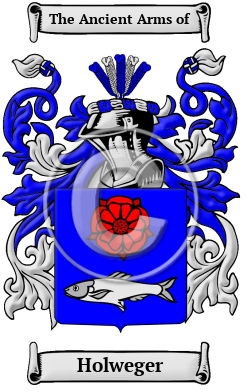 The roots of the distinguished German surname Holweger lie in the province of Westphalia. The name is derived from the Old High German words "hal," meaning "hollow," and "weg," meaning "way." Thus, the name was most likely originally borne either by someone who lived near a ravine or a narrow pass or by someone who worked as a road mender, filling in hollows in public pathways.

Early Origins of the Holweger family

The surname Holweger was first found in Westphalia, where it is believed that the name first emerged as a surname. The earliest recorded bearer of the name was Giselbert Holewecke, who was living in Cologne in 1159. Due to the occupational and habitational origins of the name, it is likely that several original bearers emerged independently in various regions of Germany during the early Middle Ages, creating many branches of the Holweger family.

Early History of the Holweger family

This web page shows only a small excerpt of our Holweger research. Another 113 words (8 lines of text) covering the years 1159, 1284, 1545 and 1628 are included under the topic Early Holweger History in all our PDF Extended History products and printed products wherever possible.

More information is included under the topic Early Holweger Notables in all our PDF Extended History products and printed products wherever possible.

Holweger migration to the United States +

Holweger Settlers in United States in the 20th Century