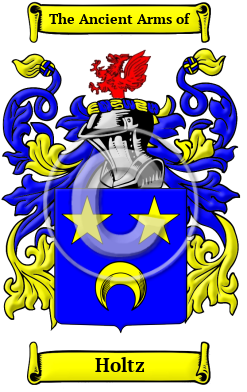 The Holtz surname is derived from the Upper German word "holz," which means "forest." Thus many of the names that evolved from this root work have to do with living in the woods, or being in the lumber industry. For example, Holzhauer, means lumberjack.

Early Origins of the Holtz family

The surname Holtz was first found in Swabia, where the name came from noble beginnings and gained a significant reputation for its contribution to the emerging mediaeval society. The name Holz has been associated with the noble cantons of Kocher and Ottenwald, where the family was connected to the great ruling dynasty of the Hohenstaufens. It is believed that the Holz family possessed feudal forest rights, and the oldest traced descendant of this branch is Siegfried von Holtz, who lived in Wuerttemberg around 1120. It later became more prominent as many branches of the same house acquired distant estates and branches, some in foreign countries, always elevating their social status by their great contributions to society.

Early History of the Holtz family

This web page shows only a small excerpt of our Holtz research. Another 100 words (7 lines of text) covering the year 1832 is included under the topic Early Holtz History in all our PDF Extended History products and printed products wherever possible.

Another 41 words (3 lines of text) are included under the topic Early Holtz Notables in all our PDF Extended History products and printed products wherever possible.

In the United States, the name Holtz is the 4,630th most popular surname with an estimated 7,461 people with that name. [1]

Holtz migration to the United States +

Holtz Settlers in United States in the 18th Century

Holtz Settlers in United States in the 19th Century

Historic Events for the Holtz family +