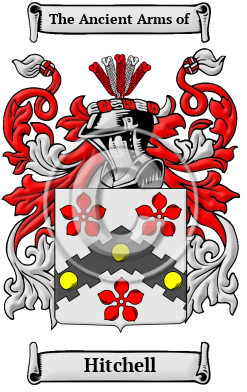 Early Origins of the Hitchell family

The surname Hitchell was first found in Warwickshire and throughout Northern England where it was listed as the name of small farms and hamlets as in Echills Wood, Nechells, Neachill in Staffordshire and Hitchells in Yorkshire. In some cases early records show the name in Derbyshire and Cheshire. Arguably this latter listing in Cheshire is the strongest and may have been the earliest reference. In Cheshire, the name was a local name "of Etchells" as found in an old manor in the parish of Stockport, in that shire. It was in the county in a register at Marple Church that many of the name was found. The name is strongest in the in the Manchester area. In 1894, Stockport Etchells was merged with the townships of Cheadle Bulkeley and Cheadle Moseley. Up to that time it was a township since the Middle Ages. Northen Etchells covered the rural area that includes much of modern-day Wythenshawe. Both are now in Greater Manchester and both were called Etchells and often administered together from the 16th to 18th centuries

Early History of the Hitchell family

More information is included under the topic Early Hitchell Notables in all our PDF Extended History products and printed products wherever possible.

Hitchell Settlers in New Zealand in the 19th Century