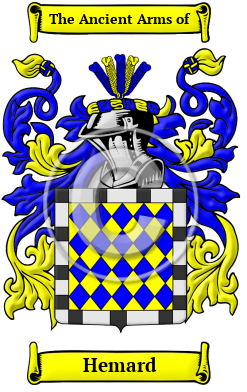 The prestigious surname Hemard originated in the beautiful and majestic region of Poitou in France. It is a topographical name, which is a type of hereditary surname. Topographical surnames were taken from physical features or landmarks that the family lived near.

Early Origins of the Hemard family

The surname Hemard was first found in Poitou, where the family played an integral role in the social and cultural domains of the region.

Early History of the Hemard family

Notable amongst the family at this time was Jean, man-at-arms for the Lord of Grève, he was also involved in the banishing of nobility from the Empire in 1467; Olivier, Lord of Viroflay in the district of Versailles...
Another 38 words (3 lines of text) are included under the topic Early Hemard Notables in all our PDF Extended History products and printed products wherever possible.

Hemard migration to the United States +

Hemard Settlers in United States in the 20th Century