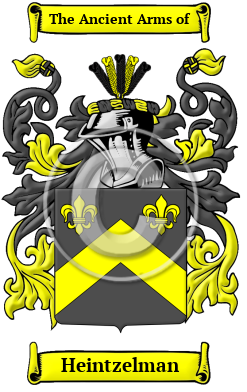 The German state of Saxony, where the distinguished surname Heintzelman arose, is renowned for both its beauty, industry, and economic power. However, in the medieval era, Germany was fragmented and inhabited by numerous Barbarian tribes, who fought amongst themselves for control of the land. The ancient dukedom of Saxony derived its name from the Germanic tribe name the Saxons who inhabited the territory after the fall of the Roman Empire. The name Heintzelman originates as a short form of the personal name Heinrich.

Early Origins of the Heintzelman family

The surname Heintzelman was first found in Saxony, where the family gained a significant reputation for its contributions to the emerging mediaeval society. The name became prominent as many branches of the family founded separate houses and acquired estates in various regions, always elevating their social status by their great contributions to society. Individual bearers of the name first mentioned in ancient chronicles include Ruf Heinz in Esslingen in 1417.

Early History of the Heintzelman family

Prominent bearers of the family name Heintzelman at this time were Joseph Heintz (or Heinz) the Elder (1564-1609), a Swiss painter, draftsman and architect; Ernst Heintze (died 1630), who became a Chancellor of Bohemia; Christopher Heins (died 1689), Lieutenant and interim Governor-General...
Another 42 words (3 lines of text) are included under the topic Early Heintzelman Notables in all our PDF Extended History products and printed products wherever possible.

In the United States, the name Heintzelman is the 16,505th most popular surname with an estimated 2,487 people with that name. [1]

Heintzelman migration to the United States +

Heintzelman Settlers in United States in the 18th Century

Heintzelman Settlers in United States in the 19th Century