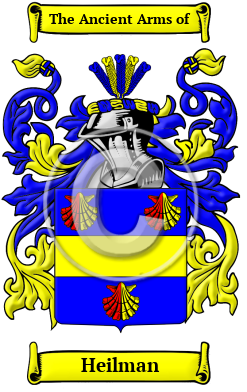 Early Origins of the Heilman family

The surname Heilman was first found in the region of Frankfurt, Mainz and Worms, in the state of Hessen or what was formerly Hessen, where this name was mainly concentrated during the Middle Ages.

Written records of the surname Heilman date back to the fourteenth century; Heile Bule is recorded as living in Frankfurt in 1343, Heilman Breithoubt is documented in Mainz in the year 1350, Heylo Herden was born in Worms in 1365, and Heilman Ditmars was found in Breslau in 1352.

Early History of the Heilman family

This web page shows only a small excerpt of our Heilman research. Another 178 words (13 lines of text) covering the years 136 and 1369 are included under the topic Early Heilman History in all our PDF Extended History products and printed products wherever possible.

Spelling variations of this family name include: Heil, Heile, Heilman, Heilmann, Heileman and others.

More information is included under the topic Early Heilman Notables in all our PDF Extended History products and printed products wherever possible.

In the United States, the name Heilman is the 4,936th most popular surname with an estimated 4,974 people with that name. [1]

Heilman migration to the United States +

Heilman Settlers in United States in the 18th Century

Heilman Settlers in United States in the 19th Century

Heilman Settlers in Canada in the 19th Century

Suggested Readings for the name Heilman +