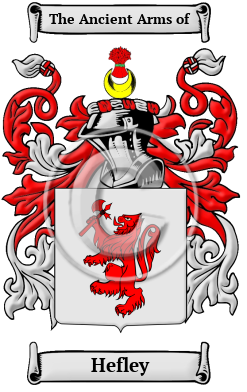 The name is derived from the Irish Gaelic personal name "ó hEamhthaigh." [1] The origins of this ancient personal name are obscure. It is possible that there is a connection to the word "eamh" which denotes a "groaning or exclamation of disgust."

Early Origins of the Hefley family

The surname Hefley was first found in the Athlone region, County Westmeath (Irish: An Iarmhí) in the Irish Midlands, province of Leinster. Later some records of the family were found in Waterford and Cork. [1]

Early recorded instances of the name are rare, but there was a bearer recorded as a husbandman of Thisteinagh, in Couty Westmeath in 1601.

Early History of the Hefley family

This web page shows only a small excerpt of our Hefley research. More information is included under the topic Early Hefley History in all our PDF Extended History products and printed products wherever possible.

Another 42 words (3 lines of text) are included under the topic Early Hefley Notables in all our PDF Extended History products and printed products wherever possible.

In the United States, the name Hefley is the 11,060th most popular surname with an estimated 2,487 people with that name. [2]

Hefley migration to the United States +

Hefley Settlers in United States in the 18th Century