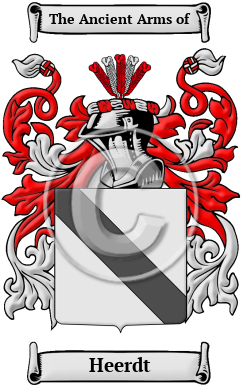 The distinguished surname Heerdt is Dutch in origin. It is derived from the Dutch word "heer," meaning "gentleman, lord" or "Mr." It is likely that this name was originally bestowed as a nickname on someone who behaved in an aristocratic manner.

Early Origins of the Heerdt family

The surname Heerdt was first found in Holland, where the ancestral home of the Heerdt family is thought to be located. During the Middle Ages, the name was also found in Germany, under the High German variation "Herr." The Heerdt family was instrumental during its early years, contributing greatly to the development of the society of the Netherlands.

Early History of the Heerdt family

From this era of Dutch history, those of this who distinguished themselves included Lucas van Heere (1534-1584), a famous Flemish painter and poet. Born at Ghent in 1534, he was the son of Jan D'Heere...
Another 35 words (2 lines of text) are included under the topic Early Heerdt Notables in all our PDF Extended History products and printed products wherever possible.

Heerdt migration to the United States +

Heerdt Settlers in United States in the 18th Century