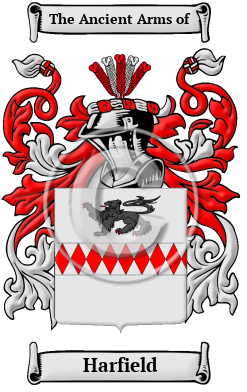 Early Origins of the Harfield family

The surname Harfield was first found in Herefordshire, where they were a family of great antiquity seated at Bosbury with manor and estates in that shire. At Bosbury the church carries some very ancient monuments to the family. Families of this name also acquired Blaise Castle in Gloucestershire, Sirhowy House in Monmouthshire, and Falcondale and Lampeter in the county of Cardigan. By the 16th century they had acquired estates in London.

Early History of the Harfield family

This web page shows only a small excerpt of our Harfield research. More information is included under the topic Early Harfield History in all our PDF Extended History products and printed products wherever possible.

During an investigation of the origin of each name, it was found that church officials and medieval scribes spelled many surnames as they sounded. Therefore, during the lifetime of a single person, a name could be spelt numerous ways. Some of the spelling variations for the name Harfield include Harford, Hafford, Hereford, Hareford and others.

More information is included under the topic Early Harfield Notables in all our PDF Extended History products and printed products wherever possible.

Harfield Settlers in Australia in the 19th Century

Harfield Settlers in New Zealand in the 19th Century