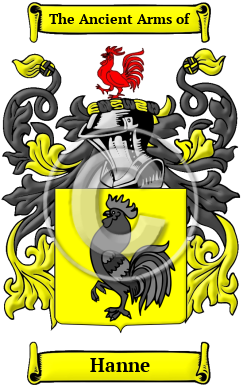 A multitude of prestigious family names, such as the surname Hanne, were formed in the lands which became the modern state of Germany, a place renowned for its beauty, industry, and economic power. However, in the medieval era, Germany was fragmented and inhabited by numerous Barbarian tribes, who fought amongst themselves for control of the land. At this time, the surname Hanne emerged throughout the German territories.

Early Origins of the Hanne family

The surname Hanne was first found in Germany, where this family name became a prominent contributor to the development of the district from ancient times. Always prominent in social affairs, the name Hann became an integral part of that turbulent region as it emerged to form alliances with other families within the Feudal System and the nation. Hans den alten Hanne and his son Hans den junge Hanne were recorded in the "Zeirschrift fur deutsche Geschicte des Oberrheins" in the year 1386. In 1498, Bernhardus Hani appears in the Wurttembergische Regesten" as a citizen of Grosseislingen.

Early History of the Hanne family

Many cultural groups lived in the German states in medieval times. Each had its own dialect and traditions, and unique variations of popular names. Low German, which is similar to contemporary Dutch, was spoken in Westphalia. German names are characterized by additions such as regional suffixes and phrases that tell something about the origin or background of its original bearer. Further contributing to the variation in German names was the fact that there were no spelling rules in medieval times: scribes recorded names according to their sound. The recorded spelling variations of Hanne include Hann, Hanne, Hänn, Hahn, Hahne, Hahnn, Hahnne, Haann, Haanne, Haan, Haane, Hahner, Hahnen, Hahns, Hahnlen, Hähnel, Hannel, Hanl, Hanner, Hanns, Haun, Haunn, Hawn, Honn, Honnel, Honner, Hohn, Hohne, Haen and many more.

Notables of the time with the name Hanne included Julius Hann (1839-1921) Austrian meteorologist and climatologist whose international reputation was built on his studies of atmospheric dynamics, thermodynamics, cyclones, climatology and the "atmospheric pulse"; August Hahn (1792-1863) German divine who served...
Another 41 words (3 lines of text) are included under the topic Early Hanne Notables in all our PDF Extended History products and printed products wherever possible.

Hanne migration to the United States +

In the immigration and passenger lists a number of early immigrants bearing the name Hanne were found:

Hanne Settlers in United States in the 18th Century

Hanne Settlers in United States in the 19th Century

Hanne Settlers in Australia in the 19th Century