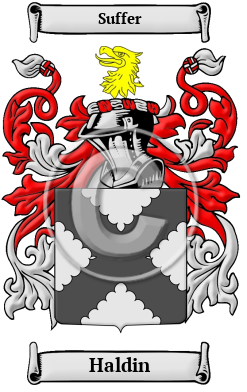 Early Origins of the Haldin family

The surname Haldin was first found in Glasgow, where "Halden filius Eadulf was one of the witnesses to Earl David's Inquisitio into the territorial possessions of the church of Glasgow a. 1124. The name Healfdene, the 'Half-Danes,' an appellation of the Hocingas and the Secgans, who took part in the campaign against Finn in the lay of Beowulf, later became a common Old English personal name, Heal(f)dane, Latinized Haldanus." [1]

Early History of the Haldin family

Another 35 words (2 lines of text) are included under the topic Early Haldin Notables in all our PDF Extended History products and printed products wherever possible.

Haldin migration to the United States +

Haldin Settlers in United States in the 17th Century