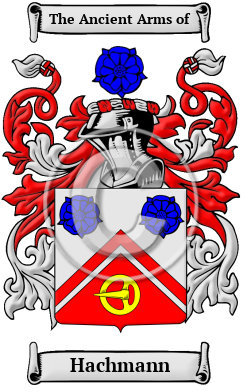 The German surname Hachmann emerged in the lands that formed the modern state of Lower Saxony, which is presently bordered by the North Sea, the Hartz mountains and the Elbe and Ems rivers. Lower Saxony was previously a medieval dukedom. In the Middle Ages, many of the Saxon lands were a part of the Holy Roman Empire, which was characterized by the Feudal System of local government. Before this era, people were known only by a single name. However, as the population increased and travelers set out on their journeys, it became necessary for people to adopt a second name to identify themselves.

Early Origins of the Hachmann family

The surname Hachmann was first found in Hamburg, where the family contributed greatly to the development of an emerging nation and would later play a large role in the political conflicts of the area. The family branched into many houses, many of which acquired estates and manors throughout the surrounding regions, where they played significant roles in the social and political affairs. Individual bearers of the name first mentioned in ancient chronicles include Heinse Hoke (Hokeman) in Stralsund, 1277, and Johann Hackeman in Bremen, 1372.

Early History of the Hachmann family

This web page shows only a small excerpt of our Hachmann research. Another 90 words (6 lines of text) are included under the topic Early Hachmann History in all our PDF Extended History products and printed products wherever possible.

Another 48 words (3 lines of text) are included under the topic Early Hachmann Notables in all our PDF Extended History products and printed products wherever possible.

Hachmann migration to the United States +

Hachmann Settlers in United States in the 18th Century

Hachmann Settlers in United States in the 19th Century