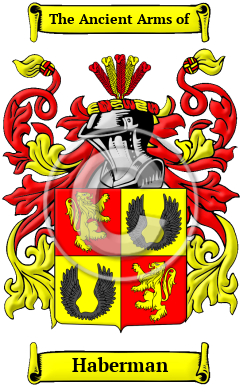 The Haberman name come from the Middle High German word "haber," meaning "oats," and as such, it was an occupational surname for a grower or merchant of oats.

Early Origins of the Haberman family

The surname Haberman was first found in Baden, where the family is considered to have made a great early contribution to early feudal society. The family became prominent in local affairs and branched into many houses, many of which acquired estates in the surrounding kingdoms, duchies, and counties.

Early History of the Haberman family

This web page shows only a small excerpt of our Haberman research. Another 85 words (6 lines of text) covering the years 1829, 1840, 1910, 1516 and 1590 are included under the topic Early Haberman History in all our PDF Extended History products and printed products wherever possible.

Notables with the surname Haberman during this period were Franz Xaver Haberl (1840-1910), who was a German musicologist. He compiled books of sacred music, including plainchants and...
Another 27 words (2 lines of text) are included under the topic Early Haberman Notables in all our PDF Extended History products and printed products wherever possible.

In the United States, the name Haberman is the 9,128th most popular surname with an estimated 2,487 people with that name. [1]

Haberman migration to the United States +

Haberman Settlers in United States in the 18th Century

Haberman Settlers in United States in the 19th Century

Haberman Settlers in United States in the 20th Century