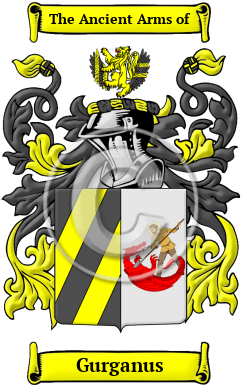 The distinguished surname Gurganus is of German origin, meaning "son of George." The name is derived from the Greek "ge ergon," literally meaning "tiller of the soil" or "farmer." Gurganus was used as a first name throughout Europe during the Middle Ages due to the legendary dragon-slaying fame of St. George, and eventually came into use as a surname around the 12th century.

Early Origins of the Gurganus family

The surname Gurganus was first found in various regions of Germany; it is likely that several branches of the family emerged independently when hereditary surnames came into common use. The earliest recorded bearer of the name was Everhardus filius Georgi, who was a resident of Hamburg in 1256. Every branch of the young Gurganus family was instrumental during this early period, each playing a major role in the development of the society of its particular region.

Early History of the Gurganus family

Another 34 words (2 lines of text) are included under the topic Early Gurganus Notables in all our PDF Extended History products and printed products wherever possible.

Migration of the Gurganus family

Some of the first settlers of this family name or some of its variants were: Wilhelm Georg and his wife Anna Marie, who settled in New York with their three children in 1709; Michael Jurg, who emigrated from the Palatinate to Pennsylvania in 1727.