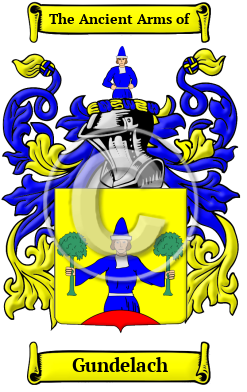 The ancient and distinguished German surname Gundelach is patronymic in origin, deriving from the name of the father of the original bearer. In this case, the name is derived from "Gundlach," which is itself derived from the Old High German words "gund," meaning "war," and "leich," meaning "tournament." The given name was popular among the nobility of Rhine-Hesse during the Middle Ages, and was thus handed down through these noble lines when hereditary surnames became common in Germany.

Early Origins of the Gundelach family

The surname Gundelach was first found in Rhine-Hesse, the southeastern region of the Rhineland, where it was a favorite personal name of the nobles of the region. Due to its military associations, it was also bestowed upon or adopted by many renowned Crusaders. The earliest known bearer of the name was one recorded simply as Gundlach, who lived in Worms in 1304. The young Gundelach family was instrumental during this formative period, figuring prominently in the history of the region and contributing greatly to the development of the medieval society of Rhine-Hesse.

Early History of the Gundelach family

Another 33 words (2 lines of text) are included under the topic Early Gundelach Notables in all our PDF Extended History products and printed products wherever possible.

Gundelach migration to the United States +

Gundelach Settlers in United States in the 19th Century