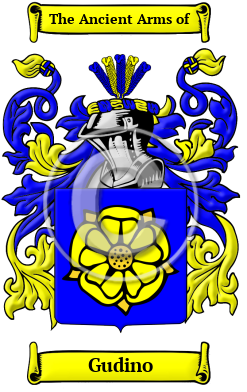 The surname Gudino developed into a surname independently, from a few sources. It evolved from the Low German word "Gude," meaning "good. " It came from the Frisian word "Gudde." As well as from the German Gut(h), which was used in the Middle Ages to refer to a free man of noble birth.

Early Origins of the Gudino family

The surname Gudino was first found in Hamburg, where the name contributed greatly to the development of an emerging nation which would later play a large role in the tribal and national conflicts of the area. In later years the name branched into many houses, each playing a significant role in the local social and political affairs. Gude is also connected to several place names in the Holstein region. The earliest instance of the name appears to be of a knight in Upper Alsace in 1251 with the name Guotman. A Herman der Guot is on record in Suz in 1236; and a Gerhard de Guden was on record in Kolberg in 1277.

Early History of the Gudino family

Notables of the time included Marquard Gude (1635-1689), a German archaeologist and classical scholar; Johann Gottfried von Guttenberg (1645-1698), Franconian nobleman, Prince-Bishop of Würzburg 1684-1698; and Johann...
Another 26 words (2 lines of text) are included under the topic Early Gudino Notables in all our PDF Extended History products and printed products wherever possible.

In the United States, the name Gudino is the 11,540th most popular surname with an estimated 2,487 people with that name. [1]

Gudino migration to the United States +

Gudino Settlers in United States in the 19th Century

Gudino Settlers in United States in the 20th Century