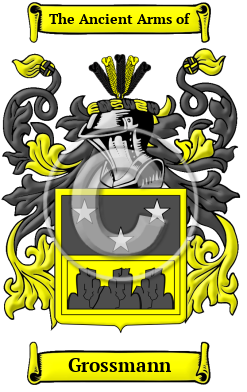 Lower Saxony was the ancestral homeland of the prestigious surname Grossmann. The surname Grossmann is a nickname surname. Further research revealed that the name is derived from a nickname that was given to the first person who used the name. Belonging to the category of hereditary surnames, nicknames are a broad and miscellaneous class of surnames, which can refer either directly or indirectly to a characteristic of the first person who used the name. They often described the bearer's favored style of clothing, appearance, habits, or character. This name was probably derived from the High German word "groz," which meant "large" or "big."

Early Origins of the Grossmann family

The surname Grossmann was first found in Saxony, where the family contributed greatly to the development of an emerging nation and would later play a large role in the political conflicts of the area. The family branched into many houses, many of which acquired estates and manors throughout the surrounding regions, where they played significant roles in the social and political affairs.

Early History of the Grossmann family

This web page shows only a small excerpt of our Grossmann research. Another 166 words (12 lines of text) covering the years 1746, 1753, 1781, and 1790 are included under the topic Early Grossmann History in all our PDF Extended History products and printed products wherever possible.

Another 44 words (3 lines of text) are included under the topic Early Grossmann Notables in all our PDF Extended History products and printed products wherever possible.

Grossmann migration to the United States +

Grossmann Settlers in United States in the 18th Century

Grossmann Settlers in United States in the 19th Century

Grossmann Settlers in Australia in the 19th Century