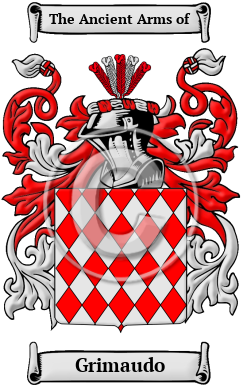 The distinguished surname Grimaudo can be traced back to the ancient and beautiful region of Piedmont. Although people were originally known only by a single name, it became necessary for people to adopt a second name to identify themselves as populations grew and travel became more frequent. The process of adopting fixed hereditary surnames was not complete until the modern era, but the use of hereditary family names in Italy began in the 10th and 11th centuries. Italian hereditary surnames were developed according to fairly general principles and they were characterized by a profusion of derivatives coined from given names. The most common type of family name found in the region of Piedmont is the patronymic surname, which is derived from the father's given name. During the Middle Ages, Italians adopted the patronymic system of name-making because it perfectly complemented the prevailing Feudal System. In Italy the popularity of patronymic type of surname is also due to the fact that during the Christian era, people often named their children after saints and biblical figures. The surname Grimaudo came from the personal name Grimaldi, which is of Germanic origin and is derived from the Old Germanic words grima, which means mask or helmet, and walda, which means bold. The family descends from Grimaldo, a Genoese statesman born in the early 1100s

Early Origins of the Grimaudo family

The surname Grimaudo was first found in Genoa (Italian: Genova), a prosperous city in Piedmont which at one time was a rival with Venice in terms of commerce and trade.

Records are found in 1169 with Grimaldo Grimaldi, Ambassador to Morocco. The Grimaldi family in Genoa at this time was extremely powerful, and was one of the four families of highest nobility. Francesco Grimaldi was a Genoese leader of the Guelphs who captured the Rock of Monaco on the night of January 8, 1297. Guised as a Franciscan monk, Francesco was greeted warmly at the gates of Monaco's castle, then seized the castle with his cousin Lord of Cagnes, and a group of men. A statue of Grimaldi as a monk with a sword under his frock stands at his memorial in Monaco today.

Early History of the Grimaudo family

This web page shows only a small excerpt of our Grimaudo research. More information is included under the topic Early Grimaudo History in all our PDF Extended History products and printed products wherever possible.

Italian surnames come in far more variations than the names of most other nationalities. Regional traditions and dialects are a decisive factor in this characteristic. For example, northern names tend to end in "o", while southern in "i". Also important, but not unique to Italy, was the fact that before dictionaries and the printing press most scribes simply spelled words according to their sounds. The predictable result was an enormous number of spelling variations. The recorded spellings of Grimaudo include Grimaldi, Grimaldo, Grimaudo, Grimod, Grimoldi, Grimaudi and many more.

Prominent among members of the family was Antonio Grimani, the Doge of Venice in 1436. He was also a Statesman, and came from a very powerful Venetian family whose highest point of influence was during the 15th and 16th centuries. His son Domenico Grimani, a humanist and diplomat, became a Cardinal in Rome during the 15th century. Of much importance was Francesco Maria Grimaldi (1618-1663), a physicist in Bologna during the early 17th century who became a professor of mathematics. He discovered the diffraction of light and was one of the first people to postulate a wave theory of...
Another 99 words (7 lines of text) are included under the topic Early Grimaudo Notables in all our PDF Extended History products and printed products wherever possible.

Migration of the Grimaudo family

Some of the first North American settlers with Grimaudo name or one of its variants: Salvatore Grimaldi, who arrived in Philadelphia, Pennsylvania, in 1852.