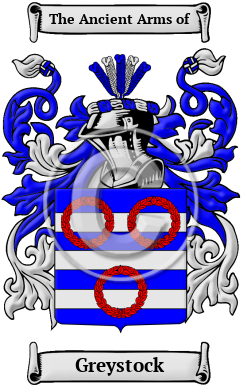 Early Origins of the Greystock family

The surname Greystock was first found in Cumberland at Greystoke, a village and civil parish on the edge of the Lake District National Park where one of the first records of the name was Ralph de Greystoke, 1st Baron Greystoke, (1299-1323), an English peer and landowner. He was the son of Robert fitz Ralph, the second son of Ralph Fitzwilliam. He took the surname of his paternal great-grandmother and became the 1st Baron Greystoke. This was the beginning of a long line of barons who retained the name Greystoke until the death of Ralph de Greystoke, 5th Baron Greystoke (1414-1487) when the Dacre family was passed the title Baron Greystoke through the marriage of Thomas Dacre, 2nd Baron Dacre to Elizabeth Dacre, 6th Baroness Greystoke. Greystoke Castle in the village of Greystoke and was originally built with a wooden tower surrounded by a pale (or pele) by Ligulf de Greystoke in 1069. His grandson Ivo Greystoke would later add stone structures to the castle in 1129. William de Greystoke, 2nd Baron Greystoke (1321-1359) obtained a royal licence to castellate it and the castle was further enlarged in the 14th century. During World War II, it was used as a POW camp and today is not open to the public but is licensed for civil weddings. John Clayton, Viscount Greystoke was the fictional English name of Tarzan who was raised in the African jungles by the Mangani great apes in the novel Tarzan of the Apes by Edgar Rice Burroughs.

Early History of the Greystock family

Greystock Settlers in Australia in the 19th Century