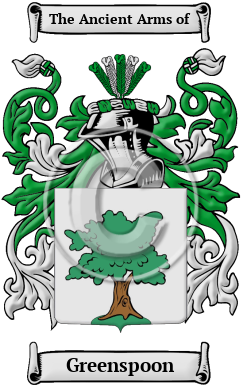 The surname Greenspoon is etymologically derived from "gruen" meaning "green." It is thought that the name Greenspoon may have been of occupational origin for a chemist who specialized in working with verdigris, a basic acetate of copper used as a green pigment or dye. Alternatively, Greenspoon may have been of nickname origin. Here the name would likely indicate somebody who liked to wear green clothes. And finally, the name may also derive from the Middle Low German "grone" or "groen" meaning "greedy for."

Early Origins of the Greenspoon family

The surname Greenspoon was first found in the southwest corner of Germany where the name has been found in records dating from the 13th century. The earliest found citing of this name shows that Frater (brother) Cuonrad, a monk called Grueni, lived in Heiligkreuztal, near Saulgau, in the year 1286. Other early records of this name include Johann Christof von der Gruen, a councilor of the Kurpfalz (an area in southwest Germany).

Early History of the Greenspoon family

This web page shows only a small excerpt of our Greenspoon research. More information is included under the topic Early Greenspoon History in all our PDF Extended History products and printed products wherever possible.

More information is included under the topic Early Greenspoon Notables in all our PDF Extended History products and printed products wherever possible.

Migration of the Greenspoon family