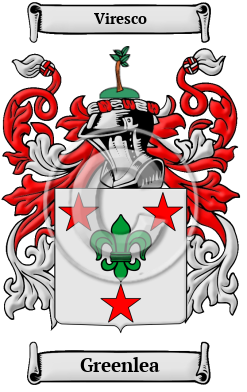 The Scottish surname Greenlea is a habitational name taken on one of the places named Greenlees, in Lanarkshire. The place name comes from the Scots words "gre-ne" meaning "green," and "ley(s)," meaning a "a meadow." [1] [2]

Early Origins of the Greenlea family

The surname Greenlea was first found in Berwickshire. [3]

"[Greenlaw, Berwickshire] is supposed to have derived its name from the situation of the ancient village on one of those conical eminences of which there are several in the parish, which eminence, from its superior verdure, obtained the appellation of the Green Law." [4]

"This is the name of an old family in Berwickshire, derived from their lands there. They may have been an offshoot from the Dunbars. William de Grenlawa, c. 1180. An agreement between the abbot of Kelso and Roland de Grenelawe regarding the chapel was made c. 1200. Magister William de Grenlau, a churchman, witnessed a charter by Walter, bishop of Glasgow, c. 1208-18, and in 1221 was one of a number appointed to settle a dispute between the churches of Glasgow and Kelso, and c. 1221-31 witnessed the grant of the church of Lympetlaw to Kelso Abbey. In 1233 he witnessed resignation of the lands of Eduluestun to the church of Glasgow. William of Greenlaw, son of Roland, son of William, witnessed Melrose documents of 1236-37, and held lands in Hawington of Robert de Muschamp, part of which he gave to Melrose Abbey before 1247, in which year he died." [5]

Early History of the Greenlea family

Spelling variations of this family name include: Greenlees, Greenleaf, Greenleas, Greenles and others.

More information is included under the topic Early Greenlea Notables in all our PDF Extended History products and printed products wherever possible.

Migration of the Greenlea family