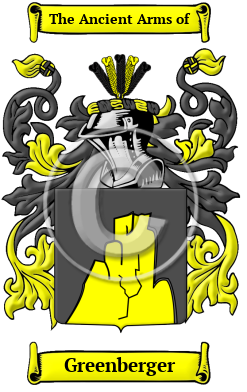 The name Greenberger is a habitational surname taken on from any of numerous places named Grünberg.

Early Origins of the Greenberger family

The surname Greenberger was first found in Baden, where since ancient times the name Grunberg was closely associated with social and political advancements of the region's feudal society. In later years the family often merged with other distinguished families, some of whom played significant roles in the local social and political affairs of the area.

Early History of the Greenberger family

This web page shows only a small excerpt of our Greenberger research. Another 73 words (5 lines of text) covering the years 1655 and 1706 are included under the topic Early Greenberger History in all our PDF Extended History products and printed products wherever possible.

More information is included under the topic Early Greenberger Notables in all our PDF Extended History products and printed products wherever possible.

Migration of the Greenberger family

Some of the first settlers of this family name or some of its variants were: Konstantin Grunenberg, who sailed to America in 1650. Andreas Grunberger came to Philadelphia in 1738; as did Friedrich Gruenberg in 1855; and John Daniel Grueneberg in 1865.