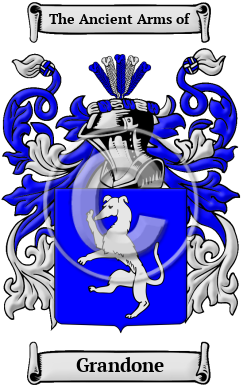 The Grandone surname comes from the word "grande" which means "tall," or "large," and evolved from a nickname for someone of large stature, in either size or reputation.

Early Origins of the Grandone family

The surname Grandone was first found in Ferrara, a city and comune in Emilia-Romagna, northern Italy, capital city of the Province of Ferrara. History dates the city back to 753. It was at war with Venice in 1471. It is a walled city and notable is the Church of S.Cristoforo. Knitted goods and shawls are made. In those ancient times only persons of rank, the podesta, clergy, city officials, army officers, artists, landowners were entered into the records. To be recorded at this time was in itself a family honor. The name was of ancient nobility.

Early History of the Grandone family

Spelling variations of this family name include: Grandi, Grande and others.

Prominent among members of the family was Ercole Grandi (1491-1531), Italian painter of the early- Renaissance period; Alessandro Grandi (1586-1630), Italian, Baroque composer; Jure Grando (Giure Grando) (died 1656), may have been the first real person described as a vampire in historical records, referred to several similar names that all meant something resembling a vampire and a warlock; Antonino Grano...
Another 59 words (4 lines of text) are included under the topic Early Grandone Notables in all our PDF Extended History products and printed products wherever possible.

Migration of the Grandone family