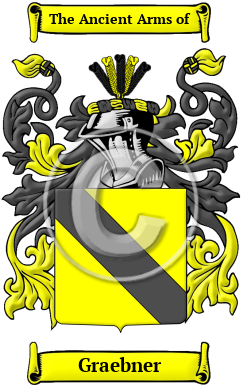 The distinguished German surname Graebner is derived from the Old High German "graban," meaning "to dig." The name was originally used to indicate "a digger of graves or ditches."

Early Origins of the Graebner family

The surname Graebner was first found in Austria, where in ancient times the Graber family played a significant role within the region's feudal society. The name Grabner became prominent in local affairs and often intermarried with other distinguished families, some of whom played important roles in the territorial conflicts of the period.

Early History of the Graebner family

During this period prominent bearers of the name Graebner were Virgil von Graben (died 1507) was an Austrian noble and knight; Maria de Grebber (1602-1680), a Dutch Golden Age painter; David Graebner who was rewarded for his distinguished service in 1700 when he was ennobled; and Johann Gottlieb Grabbe (1585-1655) was a German...
Another 52 words (4 lines of text) are included under the topic Early Graebner Notables in all our PDF Extended History products and printed products wherever possible.

Migration of the Graebner family