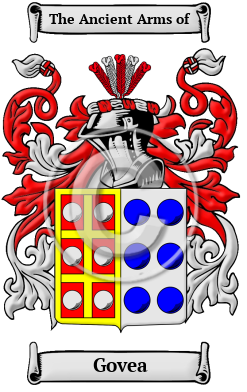 The distinguished Portuguese surname Govea is of toponymic origin. Toponymic surnames are those names which derive their origin from the name of the place from which the original bearer hailed. In this instance the name Govea is derived from the place name "Gouveia", which is the name of a town located in Portugal.

Early Origins of the Govea family

The surname Govea was first found in the town of Gouveia in Portugal. The original bearer of the Govea surname was Fernao Nunes de Gouveia, who lived during the reign of King Joao I of Portugal in the 14th century.

Early History of the Govea family

This web page shows only a small excerpt of our Govea research. Another 67 words (5 lines of text) covering the years 1368, 1497, 1548, 1505 and 1566 are included under the topic Early Govea History in all our PDF Extended History products and printed products wherever possible.

Spelling variations of this family name include: Gouveias, Govea and others.

Another 41 words (3 lines of text) are included under the topic Early Govea Notables in all our PDF Extended History products and printed products wherever possible.

In the United States, the name Govea is the 9,965th most popular surname with an estimated 2,487 people with that name. [1]

Govea migration to the United States +

Govea Settlers in United States in the 20th Century