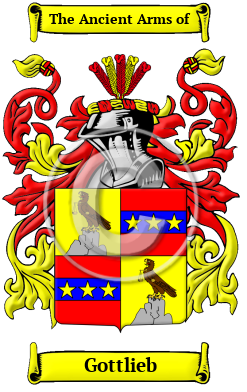 The origin of the proud surname Gottlieb can be traced to the historic kingdom of Bohemia, which is now part of Czechoslovakia. German surnames developed at a time when most of Bohemia, and most of the German provinces, were states of the Holy Roman Empire. At first people used only a single name, but as the population grew and people began to travel, they began to find it necessary to take on an additional name to differentiate themselves.

Early Origins of the Gottlieb family

The surname Gottlieb was first found in Bohemia, where this family name became a prominent contributor to the development of the district from ancient times. Always prominent in social affairs, the name became an integral part of that turbulent region as it emerged to form alliances with other families within the Feudal System and the nation.

Early History of the Gottlieb family

This web page shows only a small excerpt of our Gottlieb research. Another 65 words (5 lines of text) covering the years 1835, 1620 and 1654 are included under the topic Early Gottlieb History in all our PDF Extended History products and printed products wherever possible.

Another 48 words (3 lines of text) are included under the topic Early Gottlieb Notables in all our PDF Extended History products and printed products wherever possible.

In the United States, the name Gottlieb is the 6,182nd most popular surname with an estimated 4,974 people with that name. [1]

Gottlieb migration to the United States +

Gottlieb Settlers in United States in the 18th Century

Gottlieb Settlers in United States in the 19th Century

Gottlieb Settlers in United States in the 20th Century

Historic Events for the Gottlieb family +