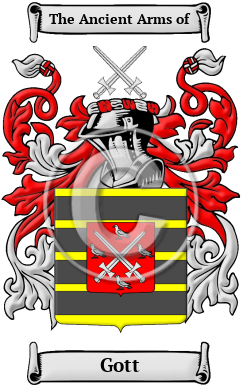 Early Origins of the Gott family

The surname Gott was first found in Bavaria, where the name was closely identified in early medieval times with the feudal society which would become prominent throughout European history. The name would later emerge as a noble family with great influence, having many distinguished branches, and become noted for its involvement in social, economic and political affairs. Like many surnames, the name Gott began as a personal name. Gott was a short form of any of several German personal names which began with that word, which means "good" or "God."

Early History of the Gott family

This web page shows only a small excerpt of our Gott research. Another 76 words (5 lines of text) covering the years 1745, 1817, 1843 and 1844 are included under the topic Early Gott History in all our PDF Extended History products and printed products wherever possible.

Prominent among members of the name Gott in this period include the Gotte family of Bavaria, ennobled September 10th 1745. Niels W. Gade was one of the most gifted and accomplished of living composers and conductors, was born Oct. 11, 1817, at Copenhagen, the son of a maker of musical instruments. His first instruction in music was obtained from a teacher who esteemed mechanical industry...
Another 64 words (5 lines of text) are included under the topic Early Gott Notables in all our PDF Extended History products and printed products wherever possible.

In the United States, the name Gott is the 5,744th most popular surname with an estimated 4,974 people with that name. [1]

Gott migration to the United States +

Gott Settlers in United States in the 17th Century

Gott Settlers in United States in the 18th Century

Gott Settlers in United States in the 19th Century

Gott Settlers in New Zealand in the 19th Century