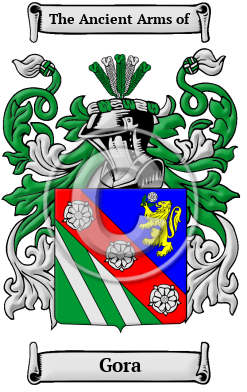 The surname Gora is a patronymic surname derived from the personal name Gregorein, which means to be awake or watchful.

Early Origins of the Gora family

The surname Gora was first found in the 13th century, when the Gregorio family was recognized as nobility in Sicily, Umbria, Modena, Pisa, Arezzo, Terni, Aquila, and Benevento.

Early History of the Gora family

This web page shows only a small excerpt of our Gora research. More information is included under the topic Early Gora History in all our PDF Extended History products and printed products wherever possible.

Italian surnames have a surprising number of forms in comparison with other European surnames because they reflect the regional variations and the many dialects of the Italian language, each of which has its distinctive features. For example, in Northern Italy the most standard Italian surname suffix is "I", whereas in Southern Italy the most typical surname suffix is "O". Sardinian is very different from other forms of Italian and in fact, it is considered to be its own distinct language. Additionally, spelling changes frequently occurred because medieval scribes, church officials, and the bearers of names, spelled names as they sounded rather than according to any specific spelling rules. As a consequence of the major changes in the Italian language and in the local spellings of Italian surnames that occurred over the course of history, there are numerous variations for the surname Gora. These spelling variations include Gregori, Gregoria, Gregorio, Gregor, Grigori, Grigorio, Grigoriis, Ghirigori, Gregoli, Gregol, Greguol, Grigoli, Grioli, Grigolo, Grigolli, Gligori, Grivori, De Gregorio, Di Gregorio, De Gregoli, Gregorich, Gregoric, Gregoretti, Gregoletti, Grigoletti, Gregoletto, Gregolet, Gorghetto, Gregorini, Gregorin, Gregolin, Grigolon, Gregorace, Gregoraci, Gregorace, Grigoraci, Gligoraci, Gregoratti, Gregorat, Grigolato, Gorgatto, Gregorutti, Gori, Gorelli, Gorella, Gorela, Goretti, Gorini, Gorin, Gorioli, Goroni, Gorno, Goracci, Gorasso, Gorassini, Goratti, Goriani and many more.

Prominent among bearers of this surname in early times was Annibale Gregori, a 16th century composer from Siena who became the Choirmaster of the Siena Cathedral. Giovanni Lorenzo Gregori of Lucca was a violinist, composer and music theorist during the mid 18th century. The Gregorio family in Sicily was feudal landowner of over 40 territories and many castles. Giovanni Gregorio, of this family, was Cardinal in Messina; Emanuele Gregorio was...
Another 70 words (5 lines of text) are included under the topic Early Gora Notables in all our PDF Extended History products and printed products wherever possible.

Gora migration to the United States +

A search of the immigration and passenger lists has shown a number of people bearing the name Gora:

Gora Settlers in United States in the 19th Century

Gora Settlers in United States in the 20th Century