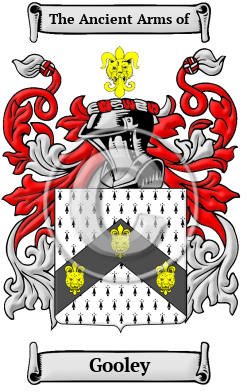 Irish names tend to vary widely in their spelling and overall form. The original Gaelic form of the name Gooley is Mac Giolla Chuille. Cuille has been suggested to be an abbreviation of Mochuille, the name of a saint. However, other origins also exist for this name.

Early Origins of the Gooley family

The surname Gooley was first found in Ulster (Irish: Ulaidh), where they held a family seat from very ancient times.

Early History of the Gooley family

This web page shows only a small excerpt of our Gooley research. Another 119 words (8 lines of text) covering the years 1618, 1667, 1743, and 1809 are included under the topic Early Gooley History in all our PDF Extended History products and printed products wherever possible.

More information is included under the topic Early Gooley Notables in all our PDF Extended History products and printed products wherever possible.

Gooley migration to the United States +

The Scots who crossed the Atlantic were often on the run from poverty as well as persecution. They brought little with them, and often had nothing of their home country to hand down to their children. In the 20th century, Clan societies and other patriotic Scottish organizations have helped the ancestors of Boernician Scots to recover their lost national legacy. Many of those families went on to make significant contributions to the rapidly developing colonies in which they settled. Early North American records indicate many people bearing the name Gooley were among those contributors:

Gooley Settlers in United States in the 19th Century

Gooley Settlers in United States in the 20th Century

Gooley Settlers in Australia in the 19th Century