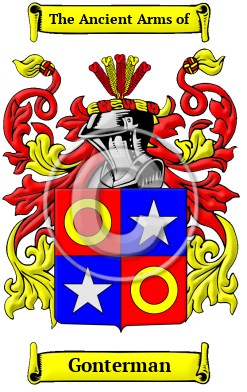 The colorful history of Saxony provides a glimpse at the oldest origins of the Gonterman family. In the medieval era, the German lands were inhabited by a variety of Barbarian tribes. The ancient dukedom of Saxony derived its name from the Germanic tribe name the Saxons who inhabited the territory after the fall of the Roman Empire.

Early Origins of the Gonterman family

The surname Gonterman was first found in Saxony, where the name emerged in mediaeval times as one of the notable families of the region. From the 13th century the surname was identified with the great social and economic evolution which made this territory a landmark contributor to the development of the nation.

Early History of the Gonterman family

This web page shows only a small excerpt of our Gonterman research. Another 81 words (6 lines of text) covering the years 1589, 1653, 1714, 1695, 1723 and 1818 are included under the topic Early Gonterman History in all our PDF Extended History products and printed products wherever possible.

Prominent bearers of the family name Gonterman at this time were Anthony Günther, Prince of Anhalt-Zerbst (1653-1714), a German prince of the House of Ascania. Johann Guenther...
Another 27 words (2 lines of text) are included under the topic Early Gonterman Notables in all our PDF Extended History products and printed products wherever possible.

Migration of the Gonterman family

Some of the first settlers of this family name or some of its variants were: Peter Gunther, who came to Philadelphia in 1738; as well as Johann Heinrich Gunther in 1754. Michael Guenther arrived in New Jersey in 1781; and Jacob Gunther came to Texas with his wife Sophie Hoessel and their four children in 1845..