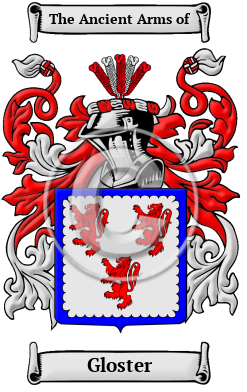 The Gloster surname was a habitational name, taken on from the city of Gloucester. This place name was originally "Gle-vum, " which was a cognate of the Welsh "gloyw," meaning "bright." The Old English "ceaster," came from the Roman (Latin) for a fort or walled city.

Early Origins of the Gloster family

The surname Gloster was first found in Gloucestershire where the surname is descended from the tenant of the city and lands of Gloucester, held only by the King, who was recorded in the Domesday Book census of 1086. It was from Gloucester that the King commissioned the Domesday Book. The name is probably derived from of the several stewards who held the lands from the King. Durand of Gloucester was such a steward.

Early History of the Gloster family

This web page shows only a small excerpt of our Gloster research. Another 92 words (7 lines of text) covering the years 124 and 1242 are included under the topic Early Gloster History in all our PDF Extended History products and printed products wherever possible.

More information is included under the topic Early Gloster Notables in all our PDF Extended History products and printed products wherever possible.

Gloster migration to the United States +

Gloster Settlers in United States in the 17th Century

Gloster Settlers in United States in the 18th Century

Gloster Settlers in Canada in the 19th Century

Gloster Settlers in New Zealand in the 19th Century