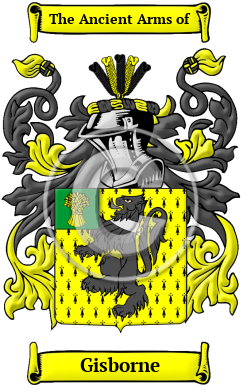 Early Origins of the Gisborne family

The surname Gisborne was first found in the West Riding of Yorkshire, at Gisburn (Gisburne.) Now within the Ribble Valley borough of Lancashire, Gisburn is a village, civil parish and ward that dates back to the Domesday Book of 1086 where it was first listed as Ghiseburne. [1] By the 12th century, early records revealed the place name's spelling as Giselburn and probably meant "gushing stream" from the Old English words "gysel" + burna." [2] The Church of St Mary the Virgin is thought to have been built as early as 1135. Conjecturally, the surname is descended from the tenant of the lands of Gisburn, Roger le Poitevin held from William de Percy the great Baron of the north who was recorded in the Domesday Book census of 1086. In 1219 Nigel de Gisburn succeeded.

Early History of the Gisborne family

This web page shows only a small excerpt of our Gisborne research. Another 78 words (6 lines of text) covering the years 1265 and 1274 are included under the topic Early Gisborne History in all our PDF Extended History products and printed products wherever possible.

More information is included under the topic Early Gisborne Notables in all our PDF Extended History products and printed products wherever possible.

Gisborne Settlers in Canada in the 19th Century

Gisborne Settlers in Australia in the 19th Century