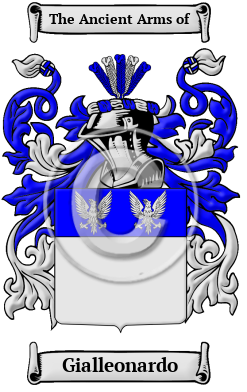 A variety of distinguished and notable names have emerged from the beautiful and historical Italian region of Tuscany, including the notable surname Gialleonardo. During the Middle Ages, as populations grew and travel between regions became more frequent, the people of Tuscany, who were originally known only by a single name, found it necessary to adopt a second name to identify themselves and their families. This process of adopting fixed hereditary surnames in Italy began in the 10th and 11th centuries, but it was not completed until the modern era. The development of Italian hereditary surnames followed general principles and were characterized by derivatives from one's given name. The patronymic surname, which is derived from the father's given name, was one of the most common name types found in the region of Tuscany. This system of name-making was widely used because it linked well with the existing Feudal System and during the Christian era, many people named their children after saints and biblical figures. The surname Gialleonardo came from a popular variation of the well-known personal name Giovanni, or John.

Early Origins of the Gialleonardo family

The surname Gialleonardo was first found in Florence (Italian: Firenze), with Lapo Gianni in 1270. Gianni was a lyric poet and a friend of famous authors Dante and Cavalcanti.

Early History of the Gialleonardo family

This web page shows only a small excerpt of our Gialleonardo research. More information is included under the topic Early Gialleonardo History in all our PDF Extended History products and printed products wherever possible.

Italian surnames have a surprising number of forms in comparison with other European surnames because they reflect the regional variations and the many dialects of the Italian language, each of which has its distinctive features. For example, in Northern Italy the most standard Italian surname suffix is "I", whereas in Southern Italy the most typical surname suffix is "O". Sardinian is very different from other forms of Italian and in fact, it is considered to be its own distinct language. Additionally, spelling changes frequently occurred because medieval scribes, church officials, and the bearers of names, spelled names as they sounded rather than according to any specific spelling rules. As a consequence of the major changes in the Italian language and in the local spellings of Italian surnames that occurred over the course of history, there are numerous variations for the surname Gialleonardo. These spelling variations include Gianni, Giani, Ianni, Ianne, Ianno, Giannelli, Gianelli, Giannillo, Gianniello, Giannella, Gianella, Giannarelli, Giannetti, Gianetti, Gianettini, Giannetto, Gianetto, Giannitto, Giannini, Gianini, Giannino, Gianino, Iannetti, Ianetti, Iannitti, Iannacco and many more.

Prominent among members of the family was Lapo Gianni (died after 1328) an Italian poet who lived in Florence, eleven ballads and six songs of his remain; Donato Giannotti, a political writer and historian in Florence around 1500; Giugio Pippi di Giannuzzi, a painter and architect who assisted Raphael. When Raphael died in 1520, Giannuzzi completed the Transfiguration in the Vatican at Rome. Antonio Giannotti was Bishop of Forlì in 1563, and of Urbino in 1568; Antonio Gianettini, born in Venice in 1649, was a composer of operas, cantatas, oratorios...
Another 90 words (6 lines of text) are included under the topic Early Gialleonardo Notables in all our PDF Extended History products and printed products wherever possible.

Migration of the Gialleonardo family

Amongst the settlers in North America with this distinguished name Gialleonardo were Antonio Giannuzio and Leonardo Giannietta, who sailed aboard the S.S. Olympia from Naples, arriving at the Port of New York on 25 July 1896, Peter Gianinni, who is on record in Santa Clara county, California in 1854, as well as Antonio and Bernardino Giannella, who were both Naturalized in Ashtabula County, Ohio between the years 1875-1906..