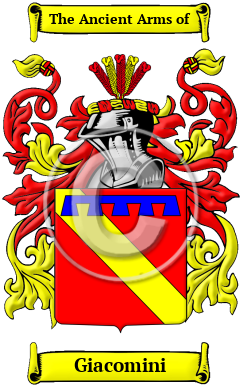 A variety of distinguished and notable names have emerged from the beautiful and historical Italian region of Tuscany, including the notable surname Giacomini. During the Middle Ages, as populations grew and travel between regions became more frequent, the people of Tuscany, who were originally known only by a single name, found it necessary to adopt a second name to identify themselves and their families. This process of adopting fixed hereditary surnames in Italy began in the 10th and 11th centuries, but it was not completed until the modern era. The development of Italian hereditary surnames followed general principles and were characterized by derivatives from one's given name. The patronymic surname, which is derived from the father's given name, was one of the most common name types found in the region of Tuscany. This system of name-making was widely used because it linked well with the existing Feudal System and during the Christian era, many people named their children after saints and biblical figures. The surname Giacomini came from the Italian form of the biblical patriarch, Jacob.

Early Origins of the Giacomini family

The surname Giacomini was first found in Florence (Italian: Firenze), where the original branch of the family emerged.

Early History of the Giacomini family

This web page shows only a small excerpt of our Giacomini research. More information is included under the topic Early Giacomini History in all our PDF Extended History products and printed products wherever possible.

Prominent among members of the family was Giacomino da Verona who was a Franciscan friar and a poet of the late 13th century. Dante's Paradiso and the Inferno were...
Another 29 words (2 lines of text) are included under the topic Early Giacomini Notables in all our PDF Extended History products and printed products wherever possible.

Migration of the Giacomini family

Discovered in the immigration and passenger lists were a number of people bearing the name Giacomini: Peter Giacoletto, who arrived in Indiana in 1892; Caroline Giacinto arrived in Allegheny in 1888; Giuseppe Giacommoni arrived in 1855; Ralph Giacomo arrived in New York in 1884.