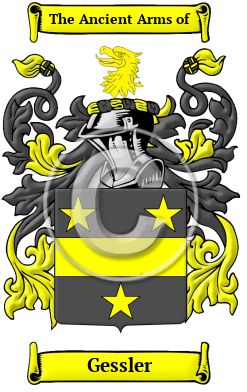 Early Origins of the Gessler family

The surname Gessler was first found in Switzerland, where the family came from the estate of Grueningen in the canton of Zurich, and gained a significant reputation for its contribution to the emerging medieval society. It later became more prominent as many branches of the same house acquired distant estates and branches, some in foreign countries, always elevating their social status through their great contributions to society.

Early History of the Gessler family

Notables of the time with the surname Gessler were Georg Gsell (1673-1740), Swiss Baroque painter, art consultant and art dealer. He was born in St. Gallen where he married his first wife in 1697. They moved to Amsterdam in 1704 where their fifth daughter Katharina was born in 1707. His wife died and he remarried Anna Horstmans, but divorced her in 1715. Gsell died, aged 67, in St. Petersburg and his wife...
Another 71 words (5 lines of text) are included under the topic Early Gessler Notables in all our PDF Extended History products and printed products wherever possible.

Gessler migration to the United States +

Gessler Settlers in United States in the 18th Century

Gessler Settlers in United States in the 19th Century

Gessler Settlers in Canada in the 18th Century