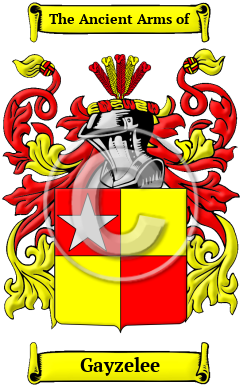 Early Origins of the Gayzelee family

The surname Gayzelee was first found in Suffolk at Gazeley, a village and civil parish in the Forest Heath district that dates back to 1219. It was originally listed as Gaysleand which literally meant "woodland clearing of a man called Gaegi," having derived from the Old English personal name + "leah." [1]

Early History of the Gayzelee family

This web page shows only a small excerpt of our Gayzelee research. Another 50 words (4 lines of text) covering the years 1326, 1630, 1669, 1762, 1839, 1824 and 1824 are included under the topic Early Gayzelee History in all our PDF Extended History products and printed products wherever possible.

Spelling variations in names were a common occurrence before English spelling was standardized a few hundred years ago. In the Middle Ages, even the literate spelled their names differently as the English language incorporated elements of French, Latin, and other European languages. Many variations of the name Gayzelee have been found, including Gazeley, Gazely, Gaselee, Gaselea, Gaysley, Geysley, Gesley, Gezley, Gayslee, Gazelee and many more.

Distinguished members of the family include Sir Stephen Gaselee (1762-1839), Justice of the Court of Common Pleas, the son of Stephen Gaselee, an eminent surgeon at Portsmouth. "On the resignation of Sir John Richardson, he was selected on 1 July 1824 to supply the vacant justiceship in the common pleas, became a serjeant-at-law 5 July 1824, and was knighted at Carlton House on 27 April...
Another 64 words (5 lines of text) are included under the topic Early Gayzelee Notables in all our PDF Extended History products and printed products wherever possible.

Migration of the Gayzelee family

Families began migrating abroad in enormous numbers because of the political and religious discontent in England. Often faced with persecution and starvation in England, the possibilities of the New World attracted many English people. Although the ocean trips took many lives, those who did get to North America were instrumental in building the necessary groundwork for what would become for new powerful nations. Some of the first immigrants to cross the Atlantic and come to North America bore the name Gayzelee, or a variant listed above: the name represented in many forms and recorded from the mid 17th century in the great migration from Europe. Migrants settled in the eastern seaboard from Newfoundland, to Maine, to Virginia, the Carolinas, and to the islands. G.H. and G.W. Gazley arrived in San Francisco in 1851..