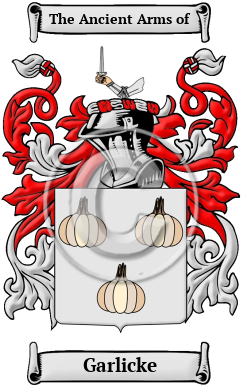 Early Origins of the Garlicke family

The surname Garlicke was first found in Cambridgeshire where Robert Garlec is generally understood to be the first record of the family as listed in the Hundredorum Rolls of 1273. The rather obvious misnomer that the name was a nickname for "'a garlick-monger', or a peasant; one who smelt of garlick" [1] has generally been dispelled. However, with that understanding, the name could have an occupational name for a spicer who cultivated and sold the onion. " Lancashire and Yorkshire were strongly represented by this name; they are so still." [1] "This is also an ancient name in the east of England. In the 13th century it occurred as Garlec in Cambridgeshire and as Garlek in Norfolk." [2] However, we can find no records of these place names surviving today. A rather rare surname, the Yorkshire Poll Tax Rolls of 1379 listed Margareta Garlek there at that time. [1] A few years later, again in Yorkshire, Gilbert Garlek was listed there in 1491. (Reeney)

Early History of the Garlicke family

This web page shows only a small excerpt of our Garlicke research. Another 60 words (4 lines of text) covering the years 1330, 1560, 1661, 1711, 1555 and 1588 are included under the topic Early Garlicke History in all our PDF Extended History products and printed products wherever possible.

More information is included under the topic Early Garlicke Notables in all our PDF Extended History products and printed products wherever possible.

Migration of the Garlicke family