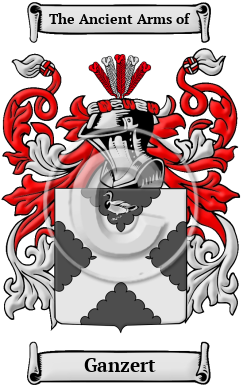 The German surname Ganzert is derived from the Middle High German word "ganser," which means "gander." Generally it came was a name for people, whose occupation involved raising geese.

Early Origins of the Ganzert family

The surname Ganzert was first found in Brunswick, where the name is considered to have made a great contribution to the feudal society which became the backbone early development in Europe. The name became prominent in local affairs and branched into many houses which played important roles in savage tribal and national conflicts, each group seeking power and status in an ever changing territorial profile. The family name also spread to Thuringia and to East Prussia.

Early History of the Ganzert family

Notables of the time included Eduard Ganz (1797-1839) was a German jurist born in Berlin, who taught law at the university. He was a liberal thinker and his course in Modern History was banned by the Prussian government. Adolf Ganz, born Oct. 14, 1796, was a violinist who studied harmony under Hollbusch; conductor at Mayence (1819), Capellmeister to the Grand Duke of Hesse Darmstadt (1825); composed a melodrama, overtures, marches, Lieder, and choruses for men's voices. His brother, Moritz, a cellist of the old school, born 1804, was first cello under Adolph at Mayence, and (1826) in the royal band at Berlin, where...
Another 132 words (9 lines of text) are included under the topic Early Ganzert Notables in all our PDF Extended History products and printed products wherever possible.

Migration of the Ganzert family

Some of the first settlers of this family name or some of its variants were: Hendrich Gans, who came to Philadelphia in 1739; Justus Gans arrived in New Jersey in 1755. Berhard Gans came to New York city in 1761; and Mathias Ganz arrived in Galveston, Texas in 1888..